Hi dear friends, how are you? I hope spring is treating you well wherever you happen to be. Spring is in full swing here in Umbria and more gorgeous than ever.

As for myself, these are the first quiet days after half a year of excitement and travels. I can hardly believe we were in our beloved Thailand in December then back home in January then on to the US East Coast on for a whirlwind cookbook tour in March.  After running through events and places at breakneck speed I have returned to Alla Madonna del Piatto in early April just in time to reopen for the season. I have had hardly any time for me to appreciate all that has happened!

As you know, I am now self-publishing my book A Kitchen with a view. This year’s  tour – which has taken me to 6 cities in 3 weeks where I have attended 14 public events – has been thrilling and heartwarming beyond every possible expectation.

I have been often asked: How did you manage? Well, I have no publisher, no PR, no agent, no funds, but I am a very fortunate person. I have love, loads of it.

I have been able to do all this because Ruurd and Tea have painstakingly supported me through the many months it takes to plan such a tour, listening to all my worries, the disappointments, the achievements. They have made me cups of tea while I was dealing with hundreds of emails. They have hugged me when I felt I would never make it to boarding that plane or that I would arrive at the other side of the world and no one would bother to come to see me.

We are a small family, each one of us is necessary to the other and we love just to be together as much as possible. However, with Tea in school, I must go on my own.  After my departure, they patiently spend several gray wintry weeks by themselves, taking care of all it’s needed to run the house and their lives without me.

And of course, I have managed to do this because I have so many friends who have dedicated countless hours to secure fabulous venues for my book presentations. We have had cookbook dinners at local restaurants, lectures hosted by cultural institutions, shop and bookstore events including The Harvard Coop in Cambridge MA, a veritable temple of knowledge.

My heroic hosts have not only taken care of every detail before, during and often after my stay, but they have welcomed me as a family member, taken time off work to help me out, offered room and transport and introduced me to their friends.

Also, I have been overwhelmed by all those, friends, relatives, future and past guests of Alla Madonna del Piatto who have come to see me at the events. Several of them traveled two hours and more to see and dine with me, often with bad weather. Someone delayed surgery. One person flew from Texas to Philadelphia.

I get tears in my eyes if I think of all these encounters, the hugs, and laughs. So. much. love.

My heartfelt thanks obviously also go to the colleagues and the cultural Institutions who have hosted me and joined in the celebration Umbria and its deliciousness: Nota Bene, Enoteca Sogno and the Italian-American Cultural Association (IACA) of Virginia in Richmond (VA), Via Umbria and NOIAW in Washington DC, Gran Cafè L’Aquila and the America-Italy Society of Philadelphia, Porsena and Cognito Media in NYC, The Dante Alighieri Society and The Harvard Coop in Cambridge MA, the Honorary Vice Consul of Italy Deborah del Sesto, the National Organization of Italian American women (NOIAW) and Pane e Vino in Providence RI. 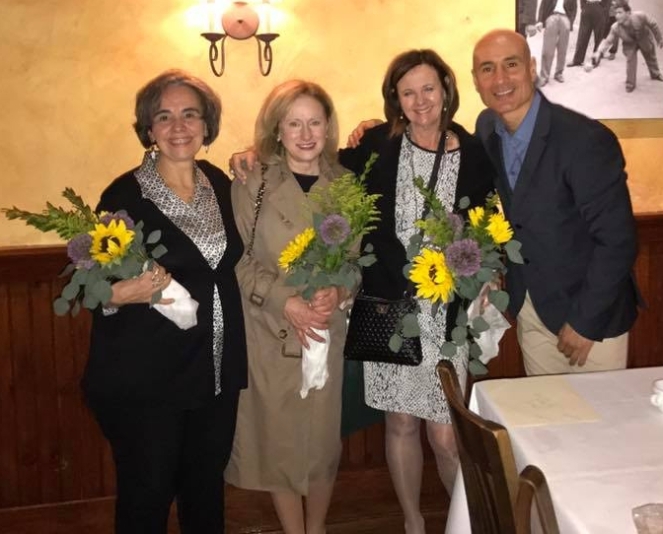 And the cooking you will ask? how about the cooking? you are not used to seeing me lecturing and socializing in civilian clothes, isn’t it?

But indeed, there have been several Umbrian-inspired gatherings during which we have re-created the simple flavors of Italian home cooking and shared our lives (and plenty wine) around the table. Thank you all for opening your homes and kitchens to me! I have had parties to last me a lifetime!

This has been such a memorable and inspiring adventure that I am ready to start planning again for next year, it’s never too early!

San Francisco and possibly other locations in California, Austin TX and Charlotte NC are already on my list. I will restrict my visits to areas with mild winters as I will have to be back in Umbria by mid-March and I want to avoid blizzards and snow.

Even in case you live somewhere else, if you wish to host me or to help me finding venues to bring the Umbrian culture and cuisine to your area, please p.m. at madonnadp[at]gmail.dot.com, thank you!

For now, I leave you with this recipe for sausages with fresh fennel which we have been making a lot this spring. It’s one of those quick mains which is perfect for a weekday and it will be especially useful later when it’s simply too hot to cook for more than 10 minutes. If you can’t find juicy fennel bulbs, substitute with diced zucchini and a handful of basil leaves instead of fennel fronds. The vegetables serve as a bed for the braised sausages, ideal for absorbing the herbal aromatics and luscious meat juices.

Heat briefly 1 tablespoon of olive oil in a large skillet over low heat. Add the sausages and 1/2 inch water, then cover and simmer until cooked through, about 20 min.

Increase the heat to high, stir the raisins and the diced fennel into the skillet and cook for 1-2 min until the fennel is caramelized outside but still crunchy. Meanwhile, chop the fennel fronds. Add 2-3 tablespoon of white wine to the sausages and scrape up any browned bits in the bottom of the skillet.  Cook until the liquid has evaporated, about 1 minute. Add the minced garlic, a twist or two of black pepper, stir one last time and plate.

Serve the sausages piping hot topped with the fennel fronds. As a side serve a few slices of rustic bread or a potato salad made with diced boiled potato tossed with chopped spring onions, parsley, and your best extra virgin olive oil.

Serves 3-4 depending on size of sausages.

This site uses Akismet to reduce spam. Learn how your comment data is processed.

A Kitchen with a view e-book, from my kitchen to yours!